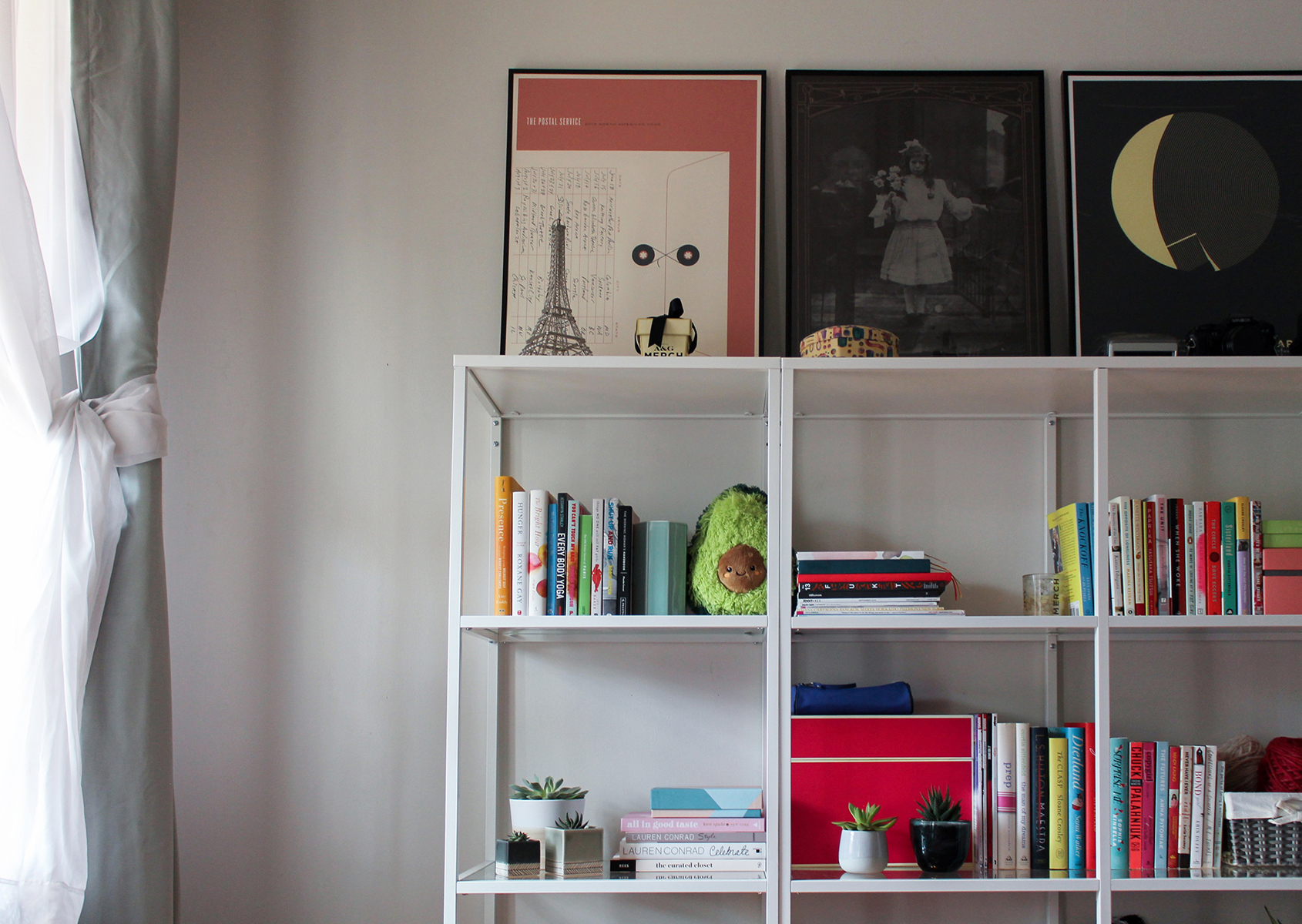 The unthinkable finally happened: I ran out of space on my bookshelf. It happened slowly as I continued trying to wedge new books into every possible nook and eventually resorted to stacking them in other parts of my room. It took a few months for me to part with the Kallax shelf that Josh so kindly (or begrudgingly?) assembled and IKEA-hacked to get just right. I’d grown attached to it. Where would I put all the random junk I used to keep on top? Would I have to move the posters that hung above it? I thought of every excuse to keep it, but it was clear that I’d acquired too many books for the old shelf to sustain. RIP.

People have often suggested that I buy fewer books, but that’s not the answer. Books are a big part of my self-care and what makes my space feel like home. I’ve loved them ever since I was a kid. I’m pretty sure I get it from my father, who had hundreds—if not thousands—of books stacked from floor to ceiling in his home office. Many of them he’d long forgotten to return to libraries in cities he hadn’t been to in decades, most likely acquired when he was working on one of his many degrees. Whenever one of his students, friends, or relatives came over, they would fall deep into conversation and then inevitably he’d say “I have a book about that actually!” before going to retrieve it from his personal stacks and handing it to them to borrow. 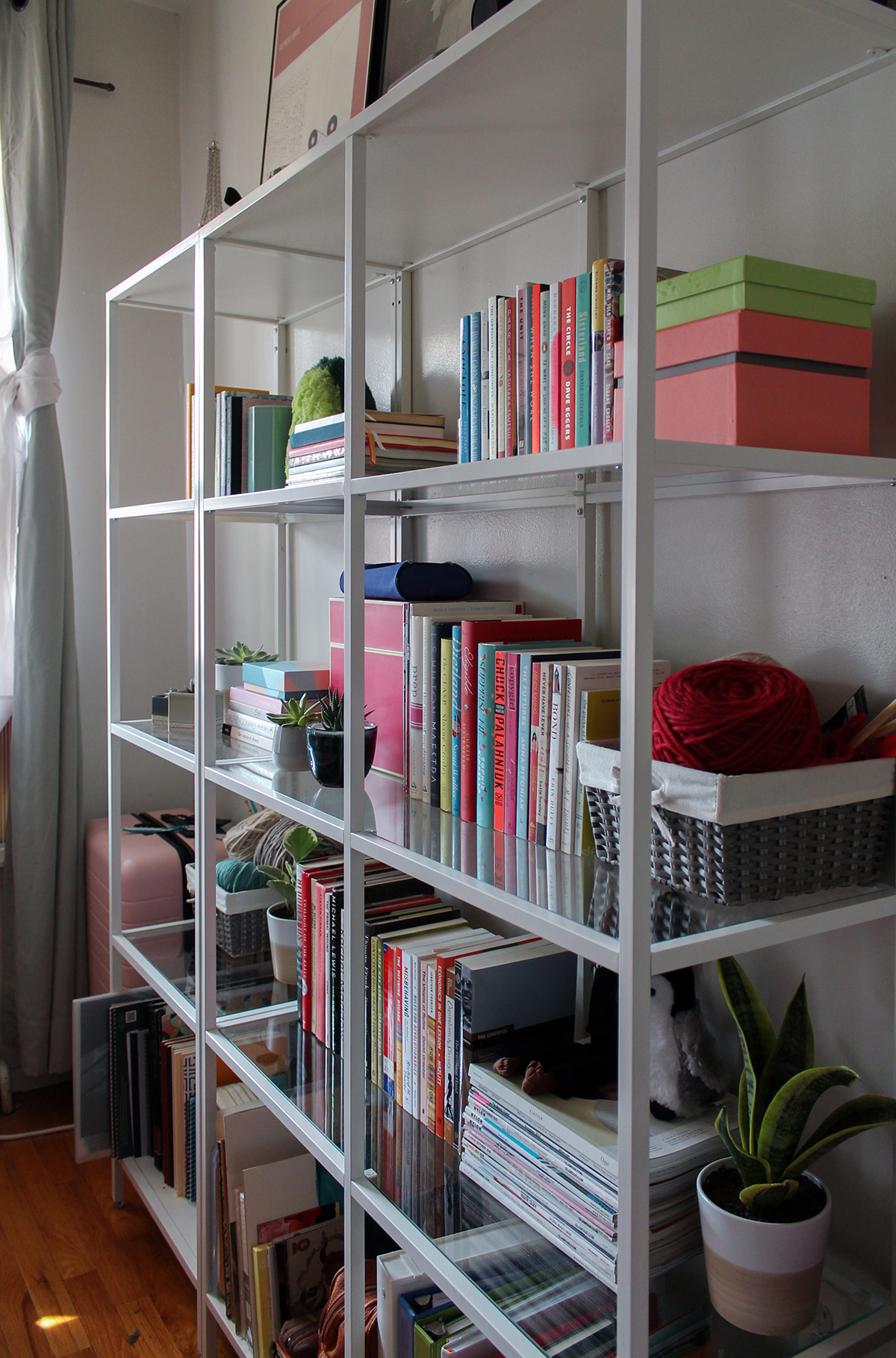 The thing about my childhood book collection, though, was that I loved buying new books—optimistically intending to read them, but generally not following through. I loved reading, but at some point in late elementary school my reading speed plateaued. Some of my classmates could read a whole novel in a day, but no matter how much I practiced, I never achieved that level of speed. This was frustrating because, as a kid who played a lot of sports, I was used to the idea that practicing would lead to improvement, but in this case it didn’t work. It wasn’t until college that I learned why.

Apparently I have something called convergence insufficiency. I’m obviously not a doctor, but basically this means that my eyes struggle to focus on one point. Logically, you would think that this would result in double vision, but because that’s annoying to see all the time, my brain developed a workaround where I would only consciously “see” the image from one eye at a time. This extra step, where my brain made a choice of image without consulting me directly, was enough to make reading extremely tiring very quickly. I remember feeling drowsy after just a few pages and getting upset with myself because I didn’t understand why. As a result, I spent most of my school career not doing the reading and instead excelling at faking it using the information that we learned in class. (Sorry, Mom. Sorry, God.)

Luckily, after getting this strange news about my eyes, I learned about something called vision therapy. I spent 9 months doing daily exercises to train my eyes to work better together. While this did not turn me into a speed reader by any means, I did make it possible for me read without falling asleep! Sometimes I can even read a book a week, which may not seem like a lot, but feels pretty impressive given that I have a job, a life, and access to the endless distractions of the internet.

These days my rule for buying books is that I can only buy one at a time: I have to finish the previous one before I buy another. This means that every book on my shelf is a reminder that I finished something that used to feel impossible. My bookshelf has become a way for me to recognize my accomplishments—to actually see them in a tangible way. So for me, getting a bigger shelf allowed me to create space for more accomplishments and a place to showcase the things that bring me joy.

Now, as promised, here are a few of the books I’ve read recently and loved! 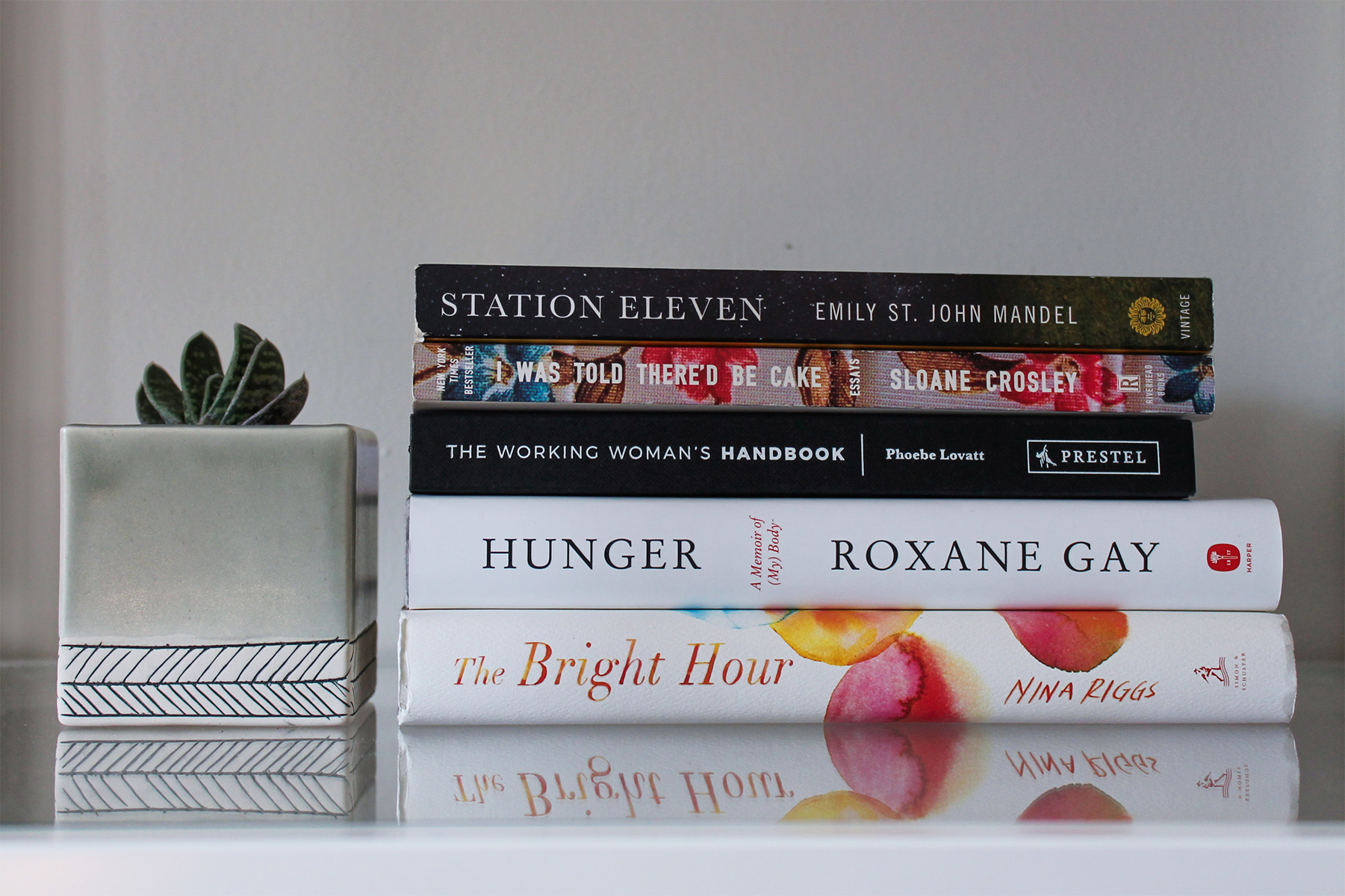 I came across this one in a magazine a while back and it had rave reviews, but I will admit that the mention of a Shakespearian orchestra in the synopsis gave me pause (as someone who doesn’t necessarily love Shakespeare or chamber music). I’m glad I finally caved and bought it after picking it up and putting back down at Strand about five different times. It blew all of my expectations out of the water. The narrative goes back and forth between the time before and the time after most of the world’s population is taken out be a flu pandemic. It is sort of like reading vignettes of the different characters’ lives before you entirely know how they fit together. Plus, it’s so beautifully written that I found myself stopping to revel in a particular turn of phrase more than a few times along the way.

I Was Told There’d Be Cake by Sloane Crosley

I first read this book of hilarious essays in high school, but I think it takes on new meaning now that I’m an adult and have lived in many of the places where her tales are set. I picked it up just because the title was intriguing (who doesn’t love cake?), but I’m glad I did because I laughed hysterically the whole way through. I’m pretty sure I lost my original copy in my ex’s mom’s craft room, but I picked up a new copy to re-read a couple years ago. If you want something lighthearted and hilarious this is a solid choice.

This one is not exactly a leisurely beach read, but I read it cover to cover and keep going back for more. I picked it up on a whim during a trip to Rizzoli and had no idea what to expect because it was shrink wrapped. I was pleasantly surprised to find a collection of easily digestible career advice, exercises, and inspiration. It has helped me think through what I want out of my career and how to get there. Highly recommend if you’re trying to figure out the next step in your career, thinking of starting a business, or considering going freelance. That said, it’s heavy on the millennial pink, so maybe skip it if that’s not your jam.

This was my first Roxane Gay and I was not disappointed. It is heavy in the way that she talks about her sexual assault and the aftermath, but I love the way she talks about her body and the different meanings that people tend to assign to fat bodies that aren’t their own. But in doing this, she also talks about the meaning that she assigns to her own fat body—the why of it and what it has meant for her throughout her life. What I appreciate most about the book is her honesty: it’s not a book about body positivity or fat acceptance, but it’s also not a book about condemning fat bodies. It’s her experience, which, like most things, is not black and white. As someone whose relationship to her own larger body is also in flux, it made me feel very seen.

The Bright Hour by Nina Riggs

This memoir was featured in several magazines and on the New York Times Bestseller list in the last year, but I bought it because I had a personal connection. Nina was one of my colleagues during the time of her cancer diagnosis and treatment. We weren’t super close, I remember in sort of broad strokes the different stages that she writes about. Her writing is so poetic and hopeful even as she is experiencing something infinitely difficult and painful in her final days. She has an uncanny ability to make you laugh and cry in a single page in a way that’s both surprising and yet makes total sense.

You can find all of these books on my Bookshop List. 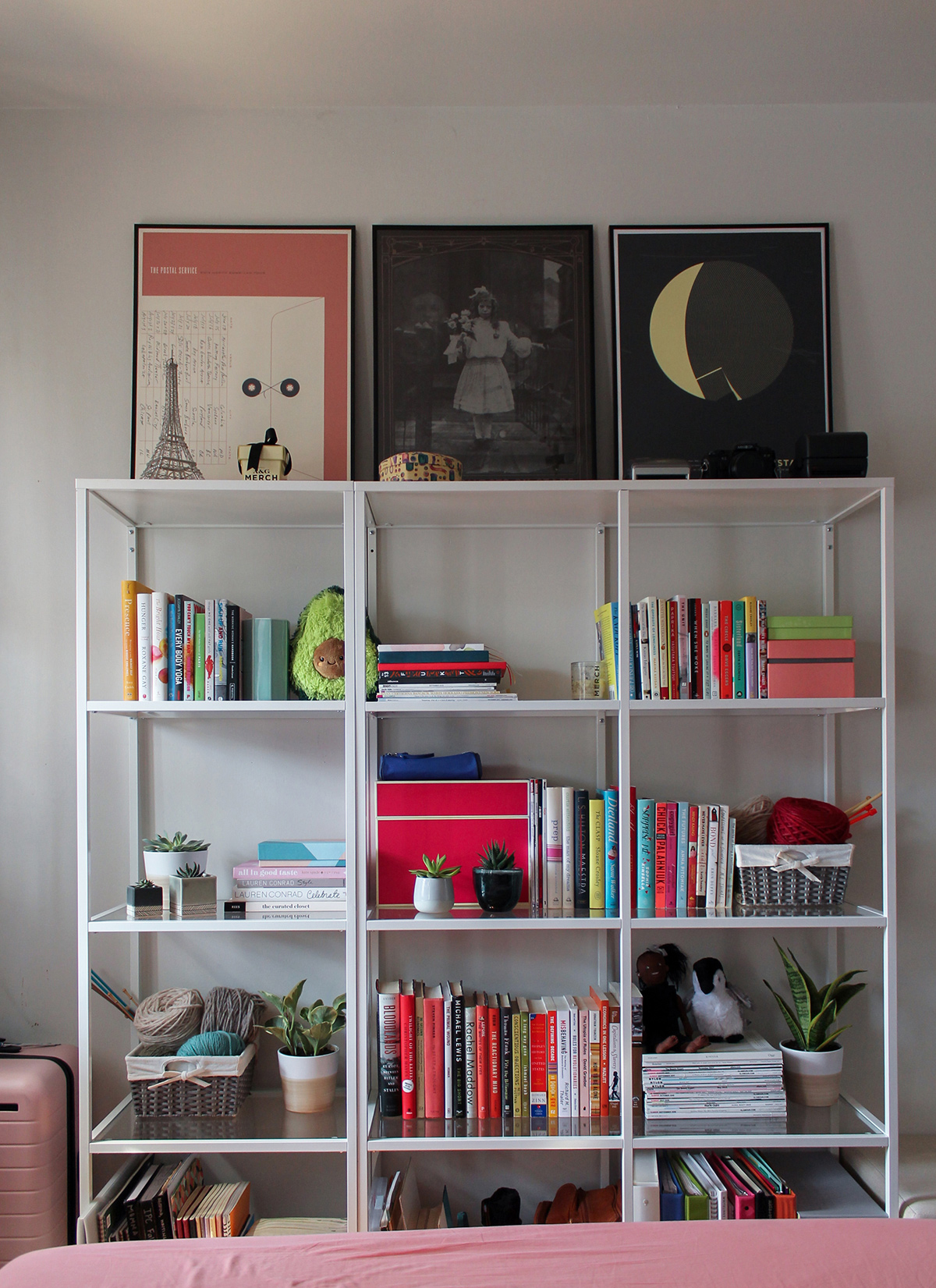 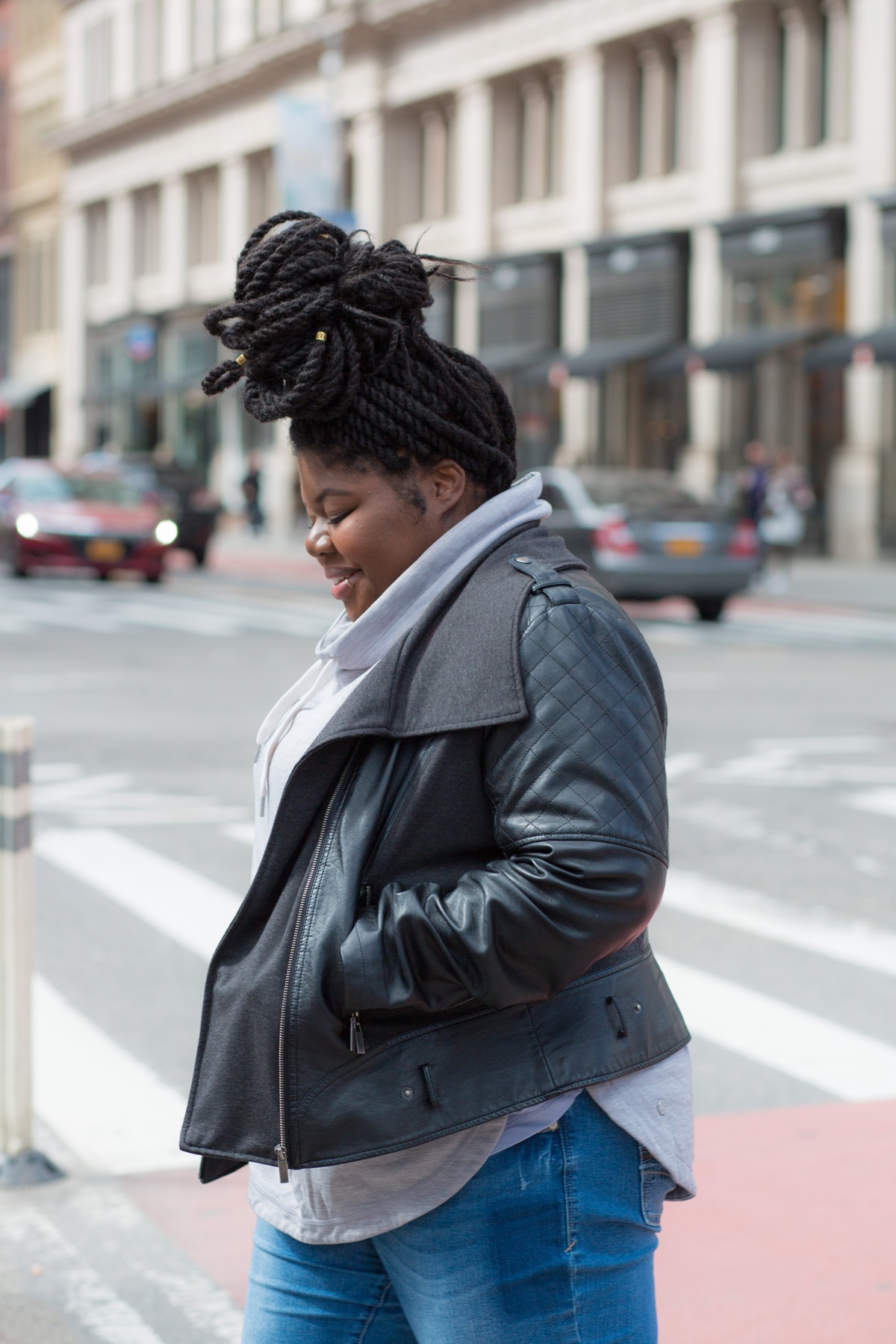 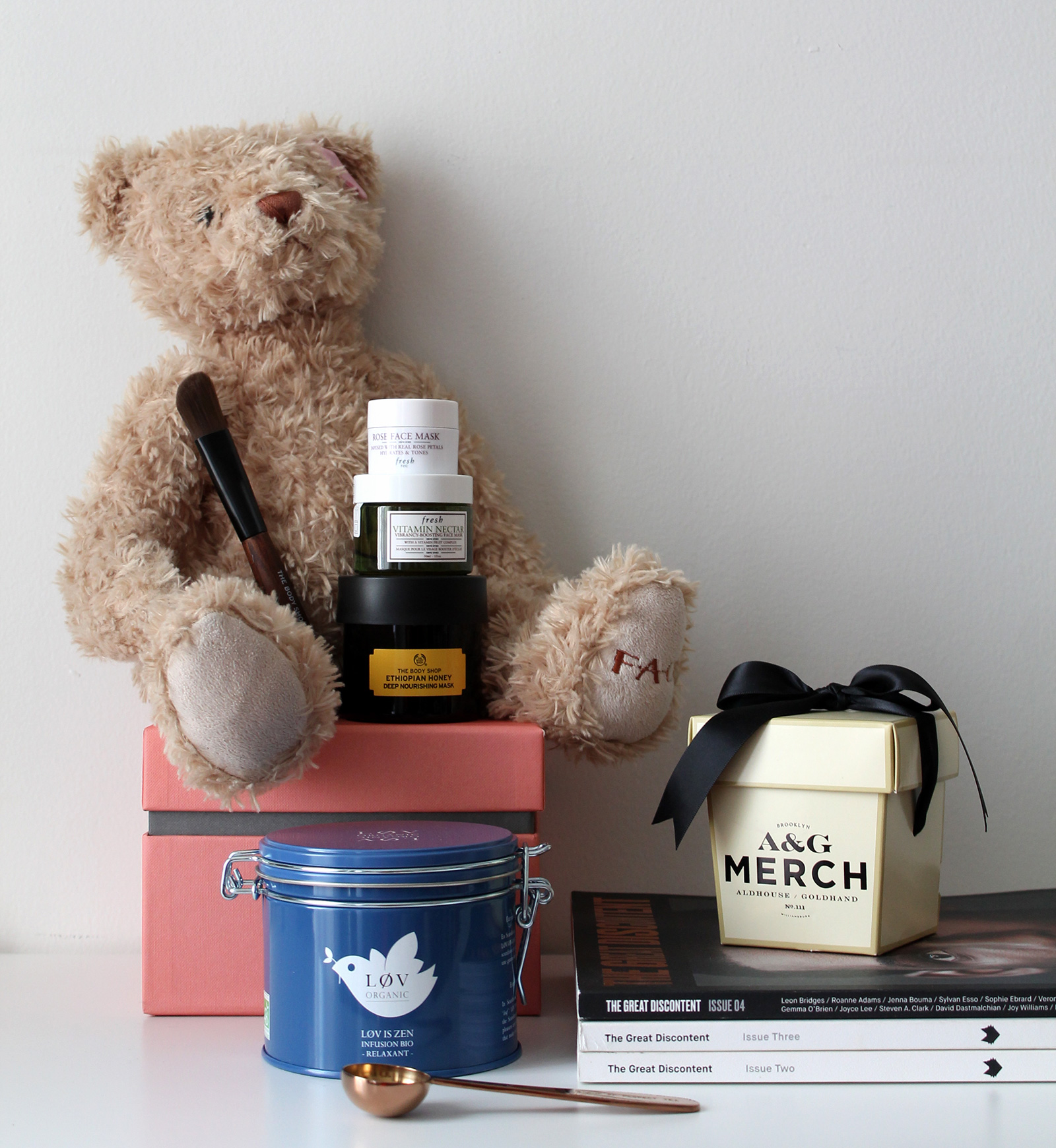